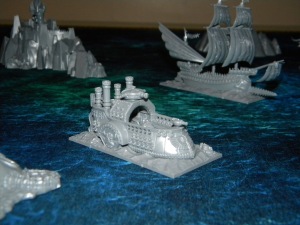 This was the first model I really began to paint, as it seemed easiest!  No doubt many others took this approach too!  The Base of the unit was the first item painted.  I have this obsession with either getting all of the bases/stands sorted first, or rarely ever getting to finish them long after I’m through with the set.  This time I wanted to get an even water effect among all models – not a fantastic one, but similar between pieces.

The model itself is a a toss-up between painting it assembled or in part.  I decided that I’d prime and base in seperate three pieces, but if I were doing over would strongly consider the drawbacks of the large seam at the very front of the model before moving forward.  It could do with some Liquid Green Stuff and a light sanding if you want to glue/assemble first, but the inner detail is lost.  Another angle you may want to consider is that the miniship inside of the hull is really only visible from a top down view, so basing should be sufficient unless you’re a completist.

Books I’m enjoying at the moment!